Groundhog's Day under Other Names....

At dawn this morning, February 2nd, 2012, a crowd of 15,00-18,000 people gathered on Gobbler’s Knob, a hill outside the town of Punxsutawney, PA, about 65 miles northeast of Pittsburgh, and watched as Phil the Groundhog, “Seer of Seers”, descendent of the first one in 1886, prognosticated that we’d have six more weeks of winter. As the vice-president of the club observed, their records state that he’s predicted that 110 times in the past, versus 16 times of not seeing his shadow, and he’s infallible, because this time of year, somewhere, they are having winter weather….For information about this festival, click here.
But this date isn’t only celebrated due to an old German superstition that hibernating animals (groundhogs, bears and wolves in America, in other countries’ lore badgers or serpents), when awakened, will pontificate about weather forecasts. It has also been celebrated by some Christian denominations as, variously, the Purification of the Virgin Mary, the Presentation of Christ in the Temple, Candlemas, or St. Brigid’s Day. Further back, it was one of the great Celtic fire feasts, Imbolc.

Whenever it’s celebrated, it’s primarily a home and hearth-centered occasion. 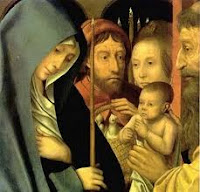 Brought up in a somewhat eclectic Protestant home, I didn’t know much about the Presentation of Christ in the Temple and the Purification of the Virgin Mary, which have sort of been put together under Candlemas over the centuries, because it was also the day that priests blessed candles for the year and sometimes gave them to their parishioners. I was familiar, of course, with the passage in Luke about it from church, and knew vaguely that the presentation was based on a Jewish ceremony, and Simeon and Anna’s joy at seeing Him. I knew that the purification of Mary was akin to references in Scottish folktales and novels to a mother’s “kirkin’” after a birth, when she was considered able to go to church again after giving birth. 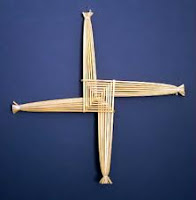 When I was a little girl, I had heard my granny, Abigail Jones Dangler, repeat the old Scots Gaelic rhyme:

"The serpent will come from the hole
On the brown Day of Bride,
Though there should be three feet of snow
On the flat surface of the ground."

I also recall her baking Bride cakes, or talking about baking, Bride cakes and other customs. (In Scotland, Bride, pronounced breed, is a variant on the name of Bridget or Brigid. We used to have a Maine Coon female named Bride after her—except that our Bride was far from saintly!) 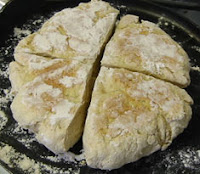 What were Bride cakes? A kind of oatcake. I can just remember her cutting the round loaf into four farls, or quarters, before baking them, slightly separated, on a cookie sheet. Since Mother hated baking, once Granny was forbidden by my father to cook anymore, that ended our having them, but I have found a recipe that I want to try.
My grandmother had what Catholics would call a devotion to St. Bride, because she was the patroness of midwives, new and young mothers, herds and flocks, the midwife who aided Mary at Christ’s birth, His foster-mother and “the Mary of the Gaels.” Considering that she was a devout Methodist, this was an example of her melding the two sides of her heritage: the strict Welsh Methodism of the weaver Gran Catrin, who saved her life and soul, and—not versus—the Hebridean Celtic Catholicism of Granny Catriona who taught her music and more to strengthen her spirit. They both taught her lore, tales, prayers and proverbs as well. (You can find more information on Conrad Bladey's site about St. Bridget here.)

It must have seemed very natural to my grandmother, as a midwife, mother of seven, and manager of a succession of rented farms, to continue reverencing Bride and things about her as handed down through the centuries. One of the earliest Christmas stories she ever told me, and one of my favorites, is “St. Bride at the Inn.” Another is: 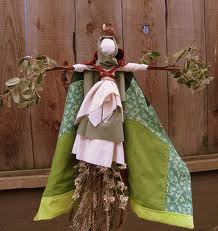 1500 years ago, when Bride decided to invent the first conhospitale, or “double house” monastery in which both men and women, married and unmarried, could live together in Christ’s service in Ireland, she went to the Bishop of Connaught to be consecrated, she and some others, who wanted to live in a community instead of in private homes in the 4th Century. The Bishop Concsecrated them, and she asked the king of Connaught for some land for it. She loved a big oak tree by a well and wanted to build there, but the King said she could not have it. They argued back and forth, and finally, she asked, “May I have as much land as my cloak will cover?”
He said yes.

This was a mistake, because there was also a story about her having hung it on a sunbeam, while a bishop friend of hers tried to do that with his and couldn’t do it. They even agreed on a day when she would claim the land.

She went to stand under the oak near the well, with four of her women grouped about her. “Now,” she said, “you agree that whatever territory my cloak will cover will be mine?”

Don’t think of her cloak as a piece of round cloth; it was actually a big square, hung around her shoulders and pinned at the throat. If she needed to, she could pull up two corners and make a hood, or bunch and tuck it to give herself pockets. At night, she could unpin it and lay it flat on her bed as an extra cover, similar to the Scottish airsaid that I sometimes wear at festivals.

They had agreed that a brehon, a judge, would give the word to start.

But first she wanted to introduce the women to the King. “This is Sister Scholastica,” she said, and an old, bent woman with white hair framing her wrinkled face, nodded. Sister Justicia was a young girl; Sister Maeve middle-aged and sturdy; and Sister Magdalene was one of the most beautiful women in Ireland, with voluptuous curves under her clothing and a dimpled smile that made many a man’s head swim. Each of them grasped a corner of the cloak and faced in a different direction.

“You may begin at any time, ladies,” said the Brehon.

“The blessing of God and His Son be on your feet this day,” said Bride. “Go!” and each one sprang into a run.

There were two miracles that day. First, that Sister Scholastica ran like a young deer outflying the wind, as the others did; and second, that the cloak stretched and spread.

And by the time the cloth went no further, it had covered all of Connaught!

Everyone had seen it, so the King could not deny it. Almost in tears, he took off his crown. “Sure and you have all my land and all on it,” he said.”So I suppose you should have meself as well, even though I never felt a calling for it.”

“Fair is fair,” said Bride. “ You would make a poor monk, but you’ve been a good king in most ways so far. Put it back on, now.” She called the women to come back, and then she sent them running again, and this time her cloak covered a river, up to the top of a mountain, a forest, and some fields, as well as the oak tree and well. And that land became the monastery of Cil deara, in modern usage Kildare, the “cell at the oak-tree well.”

And that’s the end of that tale!

My grandmother never made a St. Bridget’s Cross, since she wasn’t Irish, but I do recall her talking about making the Cailleach, or hag who symbolized winter, out of straw, and keeping it safely for the year. One story she told me was about the Cailleach going out to gather firewood on this day for the rest of the winter, and using her power to influence a clear sunny day so that she could gather a lot, and a village woman seeking a way to change the weather so the Cailleach wouldn’t stay outdoors for long. This was why folk are glad to wake to a stormy day on that date, because it means that she is asleep and perhaps winter will end soon.

She also told me that her grandmother had talked about the young lasses ceremoniously making a “Bride’s Bed,” in the hopes of bringing fertility and prosperity to the home, or hanging up bits of cloth in hopes of her blessing them, somewhat similar to the “clootie wells,” or holy wells and springs that would have clouts or rags fastened nearby in the same hope.

But I noticed in writing this that all these festivals have in common the notion of light, whether a supply of candles blessed against the darkness, or St. Bride herself, whose name means “spark” or “fire,” or the old hag stumping along with firewood under her arm, or the necessity of light in order to see (or not see) a shadow.

So whether the weather outside is warm or cold where you are, I hope that this day will find you gaining some warm, cheerful weather inwardly, as Robert Frost wrote in the last stanza of his poem, “Tree at My Window”:

That day she put our heads together,
Fate had her imagination about her,
Your head so much concerned with outer,
Mine with inner, weather.

May this day illumine you!
Posted by Barra the Bard at 7:54 PM