The Queen B & Ginny Smiley

Once upon a time, there was a storyteller who lived with the King of her Heart and two cats in Pittsburgh. One of the cats was a BIG red tabby tom named StarFreedom Tailkinker, a former street cat who loved being an indoor cat, and another, slightly smaller and paler red tom named Finn McCool, who had lived in a fraternity house before coming to live with them in Squirrel Hill. Star was named after a feline character in a Star Trek novel; Finn was named after the great Celtic hero and leader of the Fianna, survivor of many battles, games of wits, magic, and Otherworldly encounters—but it didn’t take long to realize that it was a misnomer.


Finnie the kitty gave whole new meaning to the words “Scaredy-cat!” He was afraid of EVERYTHING, especially male humans, and spent the first eighteen months in this new household mainly hiding. The two humans could not pet him at all, despite Star’s reassurances that they wouldn’t hurt him.


The day that they moved to another home in Shadyside was awful for poor Finn, who was first shut up in a bathroom, then raced around empty rooms before hiding in the corner of a closet, and yowled and panted with terror as he was taken in a carrier to the new place. But gradually as he explored it, encouraged by Star, and realized that all the furniture, litter box, toys, and food/water bowls were intact, he began to relax a little…but still wouldn’t let the humans approach too closely.


But Star got sick. From being a sleek, powerful, 24 pounds, he began to lose weight. A scratch on one eye wouldn’t heal, and after trips to the vet, the woman began putting ointment on the eye—which Star hated—and injecting insulin into the back of his neck twice a day for diabetes, and the humans were worriedly talking about something called “feline AIDS,” at that time epidemic among street cats in most large American cities. Poor Star had been infected long before he came to live with them. Good cat that he was, he did not infect Finnie.


One late November day, Star’s eye imploded. He was taken off to the vet…and didn’t come back. He had died there, of the AIDS.


Part of what made the next few days so horrible was that they had planned to board Star at the vet’s for most of a week, and have one of the wife’s students from her day job come in to take care of Finnie while they went to the wife’s family in New Jersey for Thanksgiving. The wife’s father was ill, and they didn’t want to miss the chance to visit him, so they went anyway.


Finnie was very lonely and sad, and so were the humans, even after they came back.


The student had left a note for them. “You aren’t going to believe this,” he wrote, “but Finnie’s had a complete personality change! He wanted me to pet him! I even picked him up!”


A week later, the man, John, said to his wife, “I walked by the Pet Pad on Walnut Street. They had some kittens in the window, and I saw one who was so beautiful! She’s a little Maine Coon cat, and you know how much I like them.” 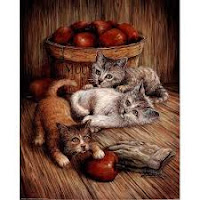 “I think that Finnie needs a friend to play with while we’re at work.”


“When you’re ready, of course,” he added. “I know you’re still grieving. Star was your cat, even before we got married.”


He said it again the next day, and the day after that. All who love folk-tales know that when something is said three times, it’s significant. So the woman went with her husband to see the kitties in the Pet Pad window.


When they went inside, and Ginny opened the back of the window, one of the kittens came over and stretched up, putting her forepaws in their dainty white mitts up on John’s arm, asking very nicely to be petted.


The woman laughed. “Well, I can see that you’re completely smitten!” she said, and they brought her home.


She was named Bride—which is pronounced breed—Cloudshaker, because that is the Scottish variant for the name Bridget, after one of the three great Celtic saints of Ireland (Patrick and Colmcille, or Columba, are the other two). She was mostly black on her back, shading through brown, grey and cream to white on her stomach, mitts and boots, with a long, bushy black tail, and when she sat with it gracefully swept around her like the folds of a train, she looked very elegant and regal. She especially liked sitting on top of a clock on a washstand in the dining-room like a queen on her throne, alert for any really good human food they might be having for dinner.
Finnie assured her that lap-sitting while listening to  the storyteller tell a legend or folktale about cats was a very cozy way to spend time with humans*, and that being groomed was a real luxury. But as a catling, she wasn’t too fastidious in her habits, and her fur became so matted that she wouldn’t sit still to be groomed, and finally the vet gave her a lion’s clip—shaving her body close but leaving her head, tail, and limbs still furry. Without all that hair on her body, she was tiny! She was also very embarrassed, so Finnie didn’t tease her (much) until after it grew back. If he tried to sniff at her, she’d swat him indignantly. From then on, she was much more fastidious about her appearance! It helped that Ginny suggested a new kind of clumping litter. Bride wasn’t getting as much of it caught in the fur around her toes or under her tail. A change in diet helped too. Ginny always gives good advice!


The humans soon found out that like Finn, the kitten had been misnamed, because Bride the cat was far from saintly. In true queen form, she preferred to delegate the mischief to her willing subject.

One warm day, the humans came home to find that the cats were out on the balcony, enjoying the sunshine. They had left the new heavy glass door open, and Finnie had figured out how exactly how to slam his body against the screen enough to hook in a claw and slide it juuuuust far enough to wiggle through.


Once the humans figured out how he did it, the wife called the door-installers, asking them to come back and put in a lock on the screen. “But you’re six floors up,” protested the salesman. “Nobody’s going to break in from that high!”


She sighed. “If any burglars got up that high, they’re pros and a lock won’t keep them out. No. What we need to do is keep our cats IN, and right now, they can open the screen door. We’re afraid that a siren might spook them and they’d fall, and we don’t want them to get hurt. If we were more than ten floors up, or less than four floors, they would have time to right themselves and land on their feet, but this high, they probably wouldn’t.”


The kitchen had a doorway but no door, which suited the cats. But the wife began noticing little pools of water on the floor. “Someone could slip and fall!”

A day or so later, she saw where they were coming from. Finnie was big enough that he could stretch up on his hind legs, and use one of his front paws to tap the lever on the refrigerator door’s icemaker to drop down an ice cube, and then he and Bride would play feline field-hockey with it. The woman taught them to play until they made a goal under the stove, refrigerator, or microwave stand, because if it melted under there, no one would slip.


Bride and Finn lived with their humans until the end of their last nine lives. The humans missed them so much that they got other cats—not that they could be replaced, because cats are as unique in personality as humans, but because the couple had learned how sociable and loving a cat can be. And they always made sure to fill the cats’ stocking at Christmas with new toys from the Pet Pad, as well getting the right food and other products.

By then Ginny had moved the Pet Pad to the Shadyside Plaza on South Highland Avenue, close to the little bridge that connects that street to Penn Circle. The trouble is, the bridge is being rebuilt, and detours have drastically cut into her business! We have known her and her staff for almost 25 years of the 40 years the store’s been in business, and they are the best pet store in Pittsburgh. As one of the two customer reviews we found of it said, it’s always good to support an independent store, and as another said:


During the "Snowpacolypse" incident, there was a period where every store in the area was closed. We had run out of hay for our rabbits but could not go anywhere to buy rabbit food. We called Smiley's to see if they were open and the owner said she was in to feed the cats there and that she would stay around for a few hours so we could make it down and buy rabbit food. We have been shopping here ever since. Definitely the best customer service I have seen from a store.


That characterizes Ginny’s professional, caring attitude. You don’t get that from big chain stores! While we always like going into the store and being greeted by Tonto the parrot or one of the shop cats, you can also shop online at http://www.smileyspetpad.com/.
Can one person buying one or two things at a time save a store like this? Well, as an old Scots Gaelic proverb says, "An lion beagan is beagan, mar a' dh'ith an cat an snadan." In English that means, "Little by little, as the cat ate the herring."


I will be posting about any special events on Facebook. Would you really like to live in a place that’s identical to every other? Bill Peduto remarked that the Pet Pad is like a tile in the mosaic that make up Pittsburgh neighborhoods and he’s right.

If you have pets, which would you prefer: a big box store mainly out to make a buck and with questionable ethics regarding where they obtain the creatures they sell, or someone with deep roots in the area, who genuinely cares about your pet’s needs?


If you aren’t physically in the neighborhood, let your fingers do the walking to their website.

Twelve Great Black Cats, and Other Eerie Scottish Tales by Sorche nic Leodhas (Dutton Books: 1972). There's also a Penguin edition (USA) with this ISBN: 0525415750. Her books can be found in libraries, Amazon and ebay.