(If you are having a problem hearing the songs, try downloading and installing Quicktime. Then reload this page.)

Growing up in the Muscanetcong Mountains of northwestern New Jersey in the late 50s-early 60s, as a Brownie and Girl Scout, I marched, among others, in the Memorial Day parades. Mother figured out that if we wanted to win any marching awards, we’d have to all be in step with each other, even if we always went last. She solved that by having me, the smallest girl in the troop, count cadence so everybody’d be in step with me. It worked, but we still didn’t win. So she asked the judges why.
“Your little girls are always skipping out of line,” she was told.
She replied, “Of course they are! They’re trying to avoid stepping in the manure from the horse units that go behind the Boy Scouts and in front of the tanks. Flattened manure is still manure!”
So, to be fair, we were moved--up to the beginning of the parade. Part of the color-guard, I was in the very front, able to look right down Main Street, empty and white in May sunshine, with crowds of people lined up on the sidewalks in front of the stores as I chanted, “Left! Right! Left! Left, left, right, left!” over and over until the words turned to meaningless mush in my mouth, setting the rhythm until we were firmly embedded in it, our footsteps sounding like one girl instead of twenty, until we got to the five corners, where Billy Yank the Civil War statue had stood until he was broken by road-workers in 1924. We swung onto Mountain Avenue, glad of it’s leafy shade, gradually slowing to allow for the slope down, down to the flats, to where we turned left through the triumphal arch of the never-closed gates of Union Cemetary. It was almost an effort to call out, “Br-r-reak step!” so that as we crossed the bridge over the river, it wouldn’t collapse under us. Then the right turn past the grandstand, down to wait between it and the river, peeling off the color-guard to stand with the other, massing flagbearers and their guards, while the other units followed our Scouts into line, and the crowd straggled down to stand on the road or find places among the graves, up on the hill.
Then the flags dipped while the clergyman whose turn it was that year  said the Invocation, and rose while we pledged allegiance. I tried not to fidget while officials recited speeches, and by the time we sang to the bands’ music, my feet were drying from the dewy grass. Then the Benediction was said, and the best moment had finally arrived. 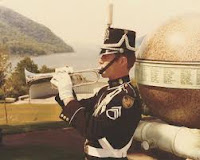 Lou Petty stood out in front of God and everybody in his Blue Ridge Drum & Bugle Corps uniform, and began to play “Taps”, pausing after each phrase. Day is done, he would play, and soft and clear would come a fainter, Day is done. People thought it was an echo from the Muscanetcong hills that guard our valley, but it was really either Jim Ball, who’d lost an ear in World War II, or my dad, up on the hill, carefully and perfectly matching Lou.
And just as Lou began the first few notes, the town’s oldest veteran would release a big flat float covered with flowers on the river. Slowly, slowly, it would glide on the current until, just as the final notes of the echo were played, it would disappear around a bend in the river, never to be seen again….
I would come back from my vague dreams and resolutions of a patriotic future, surreptiously wipe my tearing eyes, and we would reform and march back to Bell’s Lane, over to slog up the lower Washington Street hill to the grade school playground and ice cream, before the first cookouts of the season.