One of the best moments in the movie Enchanted was at the ball near the end when Giselle says to Robert, “But you said you don’t know how to dance,” and he replies, “No, I said I don’t dance, not that I can’t,” just as he sweeps her into a romantic waltz. 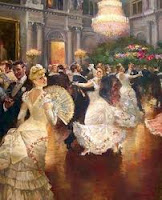 It was a satisfying moment for me, because I spent so much time as a kid and teen watching Fred Astaire with Ginger Rogers and other partners, Gene Kelly, Shirley Temple and many other dancers, and I loved ballroom dancing. If anyone had asked me then what I thought romance was, I would have answered, “Dancing in a long, lovely dress in a big room with the man you love.” Something straight out of the coronation ball scene in the 1937 or 1952 versions of The Prisoner of Zenda.
This wasn’t simply the result of watching old movies. My parents had financed their dates during the Depression by entering and often winning dance contests up and down the Jersey Shore—which meant that they danced to the live music of greats like Duke Ellington, Count Basie, Hoagy Carmichael, Bix Beiderdeke, and Dad’s favorite, Glenn Miller. On special occasions, they may have taken the train or Dad’s car up to dance at a New York City club.
When I was 7, thanks to being the unofficial mascot of the Blue Ridge Drum & Bugle Corps Band, my ambition was to be a baton twirler like Ginny Gulick, their majorette. Mother enrolled me briefly at Mrs. Taylor’s Dance Academy for lessons in baton and dance. Her younger daughter Wendy was in my big brother’s class; a year or so later, the school was closed so that she could take her daughter to join the June Taylor Dancers (no relation) on the Jackie Gleason Show in Florida. But such a void didn’t last long; soon after, Mother informed me that I was going to be attending Madame Selandia’s dance classes on Thursdays after school, at the Grange Hall on Main Street, for acrobatic, ballet and tap.
Mother had no ambitions for me to become a second Shirley Temple, unlike some mothers; in fact, other than making sure that I had a clean leotard and the dollar fee each week's lesson, after the first time, it was up to me to get myself there. No, Mother’s desire centered around a wish that I be graceful. It was a nice ambition, although mostly doomed to failure.
Mme. Selandia was a large, stout woman arrayed in a black leotard and layers of colored tutus, always topped off by a black one, fishnet stockings, and worn ballet shoes. Her dyed blond hair was styled like Betty Grable’s in the 40s, long out of date, and she carried a long wooden pointer—although I don’t recall her ever using it. Her husband was a comical contrast: much smaller, with thinning, slicked-back dyed black hair, thick glasses and a too-large suit. His role was to collect the money and change the records on the record-player behind a desk. She was the artiste.
The Grange Hall was a long rectangular room with splintery wooden floors, lined with folding wooden chairs. At the end farthest from the door was a low stage which we never used, and behind it a small kitchen, also never used except by girls hiding out from the lessons, perched on the formica counters and gabbing.

Each lesson always began the same way, with acrobatics to warm us up. We would stretch and tumble around on red gym mats, cartwheeling and doing headstands last.  That was fun! I was born double-jointed; this was something I could do well with little effort except for a headstand. My star turn was to lie on my stomach on the mat, arch my back, stretch up my legs and touch my head….This was hard for some, I could not only do that, but rest my heels on my shoulders for seven minutes at a time with no discomfort.
The largest girls having dragged the mats out of the way, we’d pull out folding chairs to serve in lieu of a barre, go through the five feet and arm positions while she slowly walked around correcting us, and then we’d be lined up to try different steps to the music and finally a dance. I liked that too, although I was soon aware that I was far from the best at that. Last would be tap, which I learned to hate. 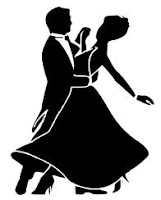