I’ve never used a glue-gun, nor decoupaged anything. I don’t bead, although my friends Linda and Betsy create works of art in that medium that I am delighted to wear. 8>)
But one day when I was four years old, Gramma decided it was time, with Mother’s help, to initiate me into the family women’s tradition of needle arts. 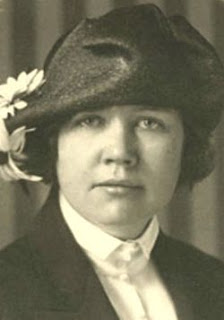 This is where the two parts of my title come together…because as Rose Wilder Lane [1] observed in The Women’s Day Book of American Needlework [2], needlework has reflected cultural times and ways throughout history.
My brother is a specialized kind of historian, fascinated by battles and tactics and wars. One night when I was a high school junior, I knocked on his door to ask. “Who won the Battle of Gettysburg, Jeff?” because I had a P.A.D. quiz the next day and had forgotten to bring home my textbook. I emerged over an hour later, dazed; he had gotten out his old model soldiers from under his bed and enthusiastically depicted the ENTIRE three-day battle, using just about every inch of space; I remember the Devil’s Cockpit was on his pillow, and Pickett’s Charge came out from under the chair I sat on with my feet drawn up.
If I hadn't been an English major (with an undeclared minor in history), I would’ve been a social historian (unlike Jeff), because why and how people do things is what interests me. “Herstory” wasn’t a term I learned until I was in my 30s, but it’s inevitably intertwined with the crafts that women did in an effort to keep their families clothed and warm, and to beautify their homes.
My maternal grandmother, Abigail Jones Dangler, was born in 1877 in New Brunswick, NJ. When she was twelve, she left a one-room schoolhouse to go to work as a hired girl on a farm, to help out her family. She’d had to use "a glass over her letters” in school, as well as using a slate that had an abacus of red, yellow and green beads strung on wires at the top of its wooden frame (I learned to count on it when I was little). Shortly after going to work, she got the “white-throat sickness” (diphtheria) on a visit home. Her Welsh grandmother, a weaver, saved her life by putting a quill—a kind of a bobbin—down down her throat to “keep it from shutting like a box.” But somehow, before she had fully recovered, she was back out on the farm, and her mistress sent her to help with the harvest; she had a relapse in the fields and suffered permanent damage to her eyes.
For at least 250 years before her, most of the women on that side of our family had gone blind from cataracts in old age. For Gramma, with already weakened eyes, the onset began earlier; by the time my aunt Abbie, the youngest of her seven children, was born in 1916, she was losing her sight, and by the time she was 70, all light perception was gone.
How could an old blind woman teach a 4-year-old to do crewel embroidery stitches?
Answer: By using some ingenuity. After all, she’d taught me to read the year before that.
Mother bought a fairly loosely-woven, plain white kitchen towel. Getting out her black Singer sewing-machine—I vaguely recall a curved metal piece that she used with her knee instead of a foot-treadle to make it go—she stitched lines of thread down and across it, then added large cross-stitches at each corner of the grid-squares she’d created. On the top row, in each square, Gramma used a needle to make samples of each stitch she wanted to teach me. The first afternoon, I watched with interest as Mother stretched the material taut between embroidery hoops. Patiently, Gramma taught me how to knot a piece of yarn. Mother showed me how to thread the largest tapestry needle she’d been able to find, It felt as big as a telegraph pole between my fingers! With their coachingI made my very first stitch, on a slant. “Noo move the tip of your needle over here underneath,” Gramma said, her soft Hebridean burr/Welsh list coming to the fore, “and push it up through the cloth, cross over the middle of your first stitch, and go down again. What dae you see? What did you make?”

“An x! I made an x!” I cried.
“That’s ca'ed cross-stitch,” she told me.
This set the pattern of her teaching method: she’d show me the one of two for that day already stitched, then slowly demonstrate it for me a couple of times, guide my hands making the first one, feel the ones I did on my own, explain my mistakes, and then I’d practice while she stitched rapidly at what she was doing and told me a story. Sometimes after a while, Mother might join us.
I happily practiced making several before we went on to the second one for that day: back stitch. Every day I’d practice, and gradually mastered blanket, chain, feather, coral, couching, lazy daisy (which made me laugh), outline, stem (those two twist in reverse to each other), rice stitch, twilling and split stitch. By now there were several grid-towels. 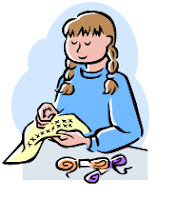 [3] There you are: an example of a carrawidget. (See the description of what this blog is about at the top of the page.) A pun. When I was in college, I found a dictionary of Tudor English (mistitled as Old English), but full of wonderful, little-used words that are satisfyingly mouth-filling and fun to say, and I particularly liked that one.
[4] I should ask Joe Wos if there are any tapestry cartoons in the ToonSeum. He  is a marvelous storyteller who illustrates his stories with cartoons, and often gives them away to children in his audiences.
Posted by Barra the Bard at 2:08 AM