The Truth of Mountains

This morning I read  the latest post, "The truth behind the truth," on the Story Route blog of Canadian storyteller Cathryn Wellner (she also has two others, Catching Courage and Crossroads). She mentioned an email that Winfried Dulisch had sent to Liz Weir, who then forwarded it to Cathryn, about storytellers knowing "the truth behind the truth we other people think we know."

I won't paraphrase her entire post--I hope you'll enjoy it for yourself!--but I am going to share the link that Dayna from Bella Coola sent her for Singing Our Treasures Back to Life. Please scroll down to the bottom of that and then up, so you can read the posts in order. They are well worth it!

Years ago, when my family still lived in northwestern New Jersey, John and I would go visit them for a week every summer. We'd spend one day down at the Shore because he's an ocean person, and one day we'd drive the 67 miles east and slightly south in to New York City, each year choosing something different to explore. One year, we took the Staten Island Ferry to the Statue of Liberty (even though our families did not enter this country there; they arrived in the 1700s and 1800s before it was established).

﻿The following year, we took the ferry to Battery Park (where my family came from Wales and Germany and France and probably, earlier, Scotland). We parked the car there and walked to the Smithsonian's National Museum of American Indians in the Aaron Burr Customs Building. I remember exhibits of painted shirts and ledger drawings; the Mesingw costume, just like the one we'd been told about by a guide at at Waterloo Village's  Lenape village recreation outside Hackettstown. Most moving of all was a huge circle of many styles of moccasins made by different tribes, from tiny beaded Plains tribes' toddlers' size to soft high desert Hopi, Navajo and Pueblo adults to furred boots worn by Inuits and other far northern tribes' hunters.

And I had a feeling I had  first had when I was 11 years old. We had gone to Mesa Verde, afterwards stopping at a visitor's center/museum. Wandering around, I came upon a mummified woman, her limbs compacted in a cross-legged position, skin stretched across her bones, strands of long hair framing her face, thin fingers like bundled sticks, and from that display case such sorrow emanated that it caught me by the throat. Once I blinked hard enough to read the placard underneath, it said  that her body had been found in a garbage pit below one of the cliff-houses, and she had been brought there.

On the one hand, seeing her made the Anasazi, the Ancestral Pueblo people, vividly alive to me, more than the empty rooms we had climbed up to and the kivas we had looked down into. But on the other, I was filled with a profound desire that she be permitted to rest as her people had believed they should be. Egyptian mummies and artifacts of any culture arouse the same dichotomy within me. Is it respectful for her to be displayed like that? I didn't think so then, so many years ago, and I don't now, even though I'm very grateful for insights into those cultures. 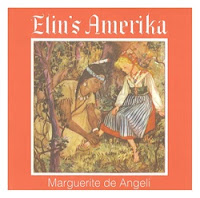 So many people have told me that they hated history classes in school...almost as many as tell me they hated English class when they learn that I was an English major. I am baffled by both responses, although I suppose that math majors can't understand why I cringe at the mere thought of numbers....But I fell in love with history when I was about 6 or 7. Mother gave me one of Marguerite De Angeli's books, Elin's Amerika, about a little girl whose Swedish family had emigrated to New Sweden in the Delaware Valley, to a small log cabin built by her father, and how lonely she was without any playmates. I could understand that, because no matter how many times we moved while I was growing up, we always seemed to go to neighborhoods without any children my age. Knowing that we weren't far from the Delaware, I asked Mother if we could go find Elin so we could play together. Gently she explained to me that Elin had lived a long, long time ago in the 17th Century, while I lived in the 20th, so no, I couldn't. But I did realize from that book that history is simply about people, that we have many more things in common than we have differences, and I have loved history ever since.
﻿﻿
﻿
﻿﻿﻿﻿﻿﻿﻿﻿﻿﻿﻿﻿﻿﻿﻿I grew up in the Muscanetcong Mountains, once the homeland of the Lenape tribe. By the time my family came there, the Lenape were long gone out west or up north to Canada, leaving behind place names like Pequest and Lopatchong, Netcong and Lacawanna, Succasunna and Allamuchy, Rockaway and Parsippany, to name a few that still sing. My father told me about his adventures as a boy along the Navesink to the south in Monmouth County, and sang about the banks of the old Raritan. I first lived in Peapack, before we moved to Budd Lake, a much simpler name than the Kant-ka-wi-anning of an earlier time. But I know that I love the long low lines of the mountains and the narrow paths of their trails and rivers the Lenape had traveled as much as they did, if in a different time. I know that their families grieved over having to leave as much as my Hebridean forebears grieved over the brutal Clearances the largely absentee landlords like the Laird of Barra, used to scatter them over the world. Those places are as much a part of me as the shape of my hands and the color of my eyes, which come from a small archipelago with names like Barra, Vatersay, Berneray, Pabbay, Sandray, Mingulay, Flodday, Lingay, Muldonaich and Uineasan.


I describe myself as a Celtic teller, the Celtic nations comprising Scotland, Ireland, the Isle of Man, Wales, Cornwall in England, Brittany in France, and some say Galicia in Spain. I specialize in the Scottish and Welsh tales, myths and legends Granny told me as I grew up.

Several years ago, the Society of Contemporary Craft decided to have an exhibit of seven Native American artists, and they invited several local storytellers. We were each to choose some of the artworks, and choose  Native American tales to tell about them, leading groups of people around the gallery. It was a nice change from doing Celtic tales, and after I researched the tribes and stories I felt best fitted the artworks I had chosen, I got in touch with Three Rivers Indian Council to make sure that those stories were appropriate, that I as a non-Native American was allowed to tell them. None of the stories were Lenape. Much as I love the ones I have found and learned, I don't tell them because I have yet to be given permission. To me, it is a matter of being respectful and courteous.

Sometimes people ask me if I will tell a feud tale. There are many of them in Scottish history. The clans lost under Prince Charlie at Culloden in part because old animosities divided them, kept them from working together and devising strategies and plans that might have prevailed against the superior firepower and manpower of the Sassanach, the English.

I rarely do tell any. Sometimes I will, if the actions of one man or woman illustrate their courage, their adherence to the laws of hospitality and honor that we are still proud of. If, like "The Calf and the Snowball," the story shows a clever use of kindness that preserves dignity, then it should be heard. But to detail atrocity--and every culture, every war, has them--merely to titillate debased emotions of superiority and division? Where is the truth in that? Oh, it is part of the truth--but we can see that on the news every night, or read it in the paper. But it is only part, not all, of the truth of who and what we are as humans on this planet.

I am a Celt. I am also a convinced Quaker, in the tradition of the Religious Society of Friends. My failures as a spiritual Friend are many. But like those of many other cultures, such as the Navajo's Beauty Way, or the six young Heiltsuk men who went from Bella Bella to New York City to sing and dance and drum and tell their artifacts back into life at the museum, and like my great-great-granny Catriona, I begin my day by thanking God, Dia , for Her blessings and mercies.

Along with a wonderful legacy of folk- and fairytales, myths, legends, folklore, poetry, plantlore, ballads, hymns, prayers, incantations, and proverbs, Great-Great-Granny Catriona transmitted a tradition of living lightly, interacting in a thrifty yet rich use of the gifts around us, and a proud joy in creating a proper, harmonious life where we are.

She began her day after that first prayer by a lustration prayer[1]:


I struggle with living with being less cumbered with things, especially books and papers, and living harmoniously. There is so much violence in the world, in my thoughts. John O'Donohue, the Irish poet and mystic, speaks of "the mountain behind the mountain." Some interpret that as the ideal. But I am more an Aristotlian than a Platonist; I am in a state of becoming. When I am quiet, I can hear the truth. When I am close to my mountains, I can see that truth a bit more clearly.

I wish you the harmony of truth.

I wish you mountains.


[1] You can find other lovely prayers like these at Ortha nan Gaidheal / Carmina Gadelica
Posted by Barra the Bard at 11:26 AM