Hawthorn, the “May-tree”  or “Faery tree,” the thorn of Oak, Ash and Thorn, was guarded by the fairy folk—woe betide you if you damaged one! Often alone by clootie wells or planted in a round grove on a hill or mound, perhaps an ancient remnant of pre-Christian religion when they were tended by priestesses, hawthorns are found in more British place-names than any other tree since Anglo-Saxon charters. Before the change to the Gregorian calendar in the 18th Century, they were said to blossom closer to the beginning of the month. While blossoming and leafy branches were cut, put into the ground and decorated by wildflowers for May Day celebrations, there was a taboo all across the British isles against bringing the flowers into the house, This may have stemmed from medieval times, when country folk insisted that the blooms smelled like plague. Scientists have found that they emit a chemical compound that does resemble the odor of decaying animal tissue; in a time when the dead were kept in the home for a few days before burial, people would have been very familiar with the smell of death.
Despite that association, the leaves, called “bread and cheese” were often eaten, and the blooms and berries were made into jellies and wines. The wood served as tool handles; the trees themselves often planted for hedges. In herblore, decoctions of the blossoms and leaves were used to stabilize blood pressure; the Druids used hawthorn to strengthen the elderly. The most famous one was the Holy Thorn of Glastonbury, supposed to have been Joseph of Arimathea’s  staff; a descendent of it still stands on Glastonbury Tor, blossoming twice a year, on May Day and at Christmas. A twig is sent to Queen Elizabeth each Christmas; she has it on her breakfast table.

The older I get, the more interested I am in the elderly helper characters in folk- and fairytales, particularly the women. One kind of these are the henwives. Not always old, they’re women who have chosen to earn their living/contribute to the family’s income by raising and selling poultry, usually defined as hens, ducks and geese. Traditionally in Scotland, they were either widowed like Jack’s mother in “Jack & the Nut,” or unmarried, as in “The Henwife & the Auld Man.”

Curious about what the poultry looked like—there are some heirloom breeds of most creatures that smallholders and farmers are trying to keep from extinction—I did some research. Before the 19th Century, probably Highland henwives had Scots Dumpies or Greys chickens. I found that most ducks were descended from Mallards, which were apparently fairly easy to domesticate, either raised from eggs or by clipping the wings of caught birds if one couldn’t buy or barter for them. The same could be said for the geese, other than domesticated white ones, if one wasn’t too far from the coast. Not only could one sell the eggs and meat, the feathers were always in demand for stuffing pillows and making pens, and chicken manure could be used in the garden. Although they aren’t specifically mentioned in the tales, poultry includes pigeons, turkeys (19th Century?), peafowl, guinea fowl, and pheasants (unlikely to have been outside large estates). Some very prosperous henwives may have had rabbits as well.

For some reason, those who lived in towns instead of more remotely were more often bad in the tales, for example in "Kate Crackernuts."

In “The Henwife & the Devil,” Jenny lives outside the village near the shore, where she forages for driftwood, seaweed (for soup), whelks and mussels when she isn’t tending her flocks, living simply and happily. One evening a traveler appears at her doorstep, and she invites him in, delighted by the unexpected company. As she serves him some of her supper, she notices under the edge of his cloak a cloven hoof; Auld Clootie, no matter what guise he takes, can never conceal his feet.
Bored down in Hell, the devil has come up to make mischief. Hearing about her in the village, praised as a "guid douce" body, he comes to see if he can corrupt her by temptation. She listens placidly as he tells her what he can give her—a big house, servants, fine gowns, etc.—but is uninterested although polite.
Finally, he asks, “What’s the desire of your heart? I will grant it!”

Jenny laughs gently. “Why, tae live as I dae, and tae help ithers!”
“You’re getting auld,” he says. “I can gie you youth, and beauty, and money tae bestow!”
“The aulder I am, the closer tae Heaven and seeing ma loved ains again,” she replies. “And haeing little, ma gifts are worth the mair tae ma friends. You seem sair troubled an’ unhappy. I’ll pray for you.”
Baffled and unable to bear this, the devil flees, leaving her in peace.

May you have her peace and contentment, whether or not you are a henwife! 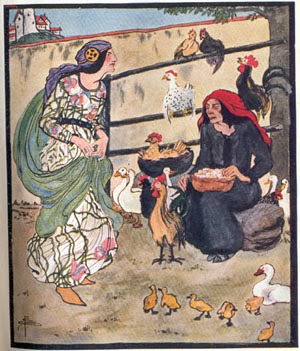