I know, I know, there’s no q in the Scottish Gaelic alphabet I’ve been using (which I finished, since it has 18 letters, not 26), but I’m filling in with a few other things for the rest of this month.

When you read the history of another country, very often there isn’t much detail about other members of royal families. 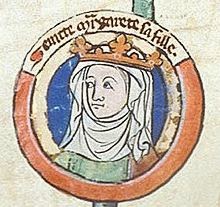 The sainted Queen Margaret, “Pearl of Scotland,” was in fact a member of the Anglo-Saxon House of Essex, one of Edgar Ætheling’s two sisters; after King Harold Godwinson was killed at the Battle of Hastings by the forces of William of Normandy in October, 1066, Edgar was proclaimed king but never crowned. A few months later, the family fled north and they took refuge at the court of the widowed King Malcolm Canmore III of Scotland. By 1070, she had married him, and they would have eight children besides the two sons from his first marriage. Her brother would spend the rest of his life in revolts, battles and mediations between the Scots and the Normans; her sister Cristina would become a nun at Romsey, England.

Margaret was learned and pious, renowned for the two ferries she established for pilgrims, the abbey she founded at Dunfermline, her personal acts of piety, and her efforts to reform the Church of Scotland in accordance with Rome, the reasons why she was canonized by the Pope in 1250; her feast day is celebrated on either June 10th or November 16th.

Why am I writing about her? Because I can’t think of her without feeling irritated! She was a proponent of St. Andrew the Apostle being made the patron saint of Scotland, instead of St. Colmcille [pronounced kolm-kihl] or Columba—and I firmly believe that Colmcille should have that title.

Granted, both saints were holy men, and neither was born in Scotland. Andrew won because he “outranked” Columba. But really, as patron saint of several countries, surely he had enough to do without worrying about Scotland! Some of his relics (a kneecap, an upper arm bone, three fingers and a tooth) were taken from the East by St. Rule, who’d had a dream that he should take these hidden relics to the ends of the earth for protection; wherever he was shipwrecked was where they were meant to be. That turned out to be St. Andrew’s in Scotland, now much better known for the famous golf course.

Colmcille, born an Irish prince, a bard-turned-monk, left Ireland vowing not return until he had won as many souls as had died or been maimed during the “battle of the book” in 561. He traveled to Scotland, and after several adventures, was given the isle of Iona, where he built a monastery still famous as the site of a spiritual community today.

At least he actually set foot in Scotland and lived there before he died!