I Is Iona, the Holy Isle

I: Iogh, Yew in the Scottish Gaelic alphabet.
Because I am going to write another post for this challenge using the letter I, I’ll write about yew in that one.


Iona, the Holy Isle, is ancient in so many ways! One of the isles of the Inner Hebrides, off the west coast of Scotland, its stones have been dated to over 1500 million years old.
In that long history, it has had many names, including “the isle of the Druids,” and some believe that it was the capitol of that religion, and that it was succeeded by a group of Culdees, the Céli Dé (in Scottish Gaelic, Kelidei, meaning “Companions/ children of God”—although some say that they came much later to the island. Apparently they were a Gnostic group who believed in mediation, helped the poor and sick, and had an interest in liturgical music.

I was told many tales of the Hebrides by my grandmother, Abigail Jones Dangler, which she learned from her grandmother, Catriona MacNeill Ellison of the Isle of Barra, who handed down her devotion to Colmcille (pronounced with “k,” not “s” sounds), otherwise known as St. Columba, Apostle to the Picts and founder and first abbot of Iona’s Celtic Church.

Born a prince in Ireland in 521, raised to be a bard, as a youth he became a monk and later an abbot, founding several abbeys in Ireland before the infamous "first copyright battle."  He borrowed a book to copy it by hand from St. Finnian, returned the original and became angry when the other abbot demanded the copy as well. Their argument eventually was taken to the highest judge in Ireland to be judged. That worthy Brehon asked Colmcille what the books were made of. Parchment, of course, made from the hides of sheep or cattle. “Then let the calf stay with the cow,” he ruled. Fuming, Colmcille gave up his copy…and because he couldn’t let it go easily, before long both their clans were fighting over it in the terrible battle of Cuil Dremne. It’s said that 5,000 men were killed or maimed in that first copyright quarrel.

Horrified, Colmcille vowed to exile himself from Ireland until he saved that many souls in penance. With twelve monks who insisted on going with him, he set off in a currach to Scotland, wandered around having adventures (including an encounter with Nessie), and ultimately converted the pagan king of Alba, who gave him Iona, a small rocky island. Columba established a monastery there which became one of the most important religious sites in the Western world of the 6th century and for centuries afterwards. It’s said that the Book of Kells was written and illumined there, perhaps some pages by Colmcille himself. He worked as a missionary and diplomat among the clans, established other churches in the Hebrides, turned the monastery at Iona into a school for missionaries, and is said to have written several hymns and transcribed 300 books. That last alone is an amazing achievement! He died in 597, and came to be revered as one of the three great saints of Ireland with Patrick and Bridget. 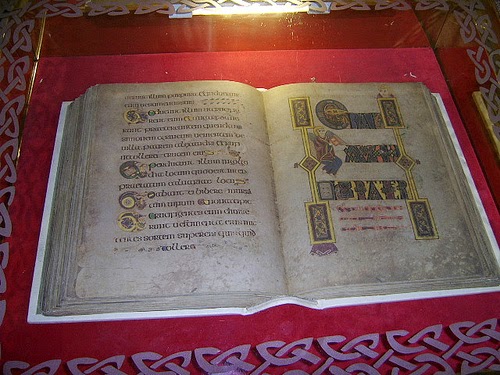 It’s said that the Book of Kells was begun there, perhaps some pages written and illumined by Colmcille himself. He worked as a missionary and diplomat among the clans, established other churches in the Hebrides, turned the monastery at Iona into a school for missionaries, and is said to have written several hymns and transcribed 300 books. That last alone is an amazing achievement! He died in 597, revered as one of the three great saints of Ireland with Patrick and Bridget.

Iona was so famous that two hundred years later, having produced missionaries who went as far east as Kiev and probably did achieve his goal of converting so many souls, it was a prime target for the Vikings. As a result, his remains were divided between Scotland and Ireland in 849; by then, the monks had left and the buildings were falling into ruin.

Yet the fame and sanctity of the island was so great that many Irish, Scottish and even some Viking kings were buried there. It has been said that there was a Culdee community there for a while. (Yes, I know I wrote about them being there earlier, but there’s some controversy about when).

Iona is still a place of retreat and meditation; the IonaCommunity holds many events there today, and ferries often combine trips to it with Staffa, famous for Fingal’s Cave and unusual eight-sided basalt stones.

Here are the words of one of his prayers; Linda and I do it to a Manx tune, “Colmcille’s Vow”:

God’s peace, and man’s peace
God’s peace and Colmcille’s,
On each window and each door,
On every space admitting moonlight,
On the four corners of the house,
On the place of rest,
And God’s peace on myself
And God’s peace be on you.