Why the Piper *Had* to Take His Revenge 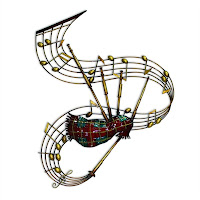 Recently on the Storytell list, there’s been a thread on spine-tingling stories for adults. I think it was Richard Marsh who mentioned a Scottish tale, “The Piper’s Boots”, aka “The Cow That Ate the Piper,” a tale I haven’t told for a long time and will probably do in my solo set this Tartan Day, April 6th. There was some discussion as to whether it was the same story as “The Piper’s Revenge;” Karen Chace cited Billy Teare’s version that can be found in Holt & Mooney’s More Ready-to-Tell Tales from Around the World. When I tell it, I stress the importance of hospitality in Scottish culture.

What is hospitality, anyway? The hotel industry and airports have “hospitality rooms,” usually in conjunction with conventions, where beverages and some food may be dispensed to the attendees. Sometimes you’ll hear a person say to a host, “Thank you for your hospitality!” after a convivial evening or weekend visit.

Current usage is that hospitality “still involves showing respect for one's guests, providing for their needs, and treating them as equals.” Here in the West, we mostly associate it with entertainment and etiquette.

But in many cultures such as the ancient Greeks’, and even today among the Pashtun people of Afghanistan and Pakistan who follow Pashtunwali, hospitality was/is an ethical necessity. In Scotland for many generations, it was a sacred duty. In the Highlands, where lack of shelter and protection from enemies can mean death from exposure, turning someone away could be tantamount to murder—and in “The Cow That Ate the Piper’s Boots,” the miserly farmer is guilty of just that, allowing his hatred of bagpipes to endanger a poor, ragged piper who has asked for shelter one late winter-early spring evening. 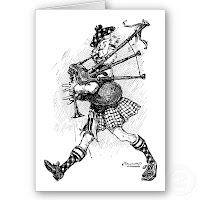 Shivering through the night under a nearby hedge, the piper vows to get revenge. After all, the miser’s attitude is a danger to others and violates an implicit social and moral contract. Reluctantly, the piper goes on his way the next morning, cold, hungry and angry. A year or so later, the piper finds himself in the same area, and is refused again. Going to the hedge, he finds the remains of a frozen man who probably had also been denied, and notices that the dead man is wearing a pair of good stout brogues, whereas the piper’s are so worn that he knows he may get frostbite at the least if he stays outdoors that night. 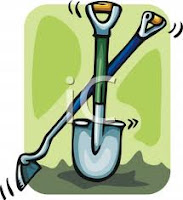 Along come two farm laborers, who have gotten lost on their way to a hiring fair, where they could secure employment for the coming year. As is the custom, they are carrying tools that are symbols of their craft: one has a hoe, the other a spade. As they talk, the men decide to help out the piper—and the one with the hoe chops off the frozen man’s feet (and shoes) which the piper stows in his pack. The two laborers, both burly men, go to the miser’s door and shove their way in, then summon the piper to share the roof. The miser is furious, but cannot eject them. So he exacts a petty revenge by giving them poor fare for supper, and takes the candle with him when he retires to his room ben the main one.

This house is a “but-and-ben” black hoose, a small stone cottage consisting of two rooms and a connected byre, or stable, for his livestock. If you ever saw the movie Rob Roy, you saw an example. These were eminently practical, because the animals’ body-heat helped to warm the rooms in cold weather. The miser only has one cow in his, a poor straivling (starving) creature with just a wisp of straw for its bedding—and this is where he insists the piper must stay, instead of by the peat fire in the main room. Of course, as soon as the miser goes to bed, the piper rejoins his new friends—and he puts the frozen feet near the fire to thaw. This gives the piper an idea….

The next morning, the miser gets up to find just the laborers by the fire, eating large bowls of porridge, more than he would willingly give them, and they insist he call the piper to join them. However, all that is left of the piper in the byre is the two feet next to the cow. 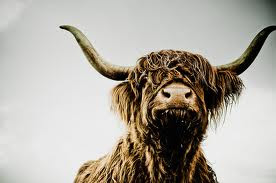 The laborers immediately begin talking about the “cannibal coo” and the miser’s responsibility under the law.  They must report it, even though he will probably be heavily fined for having such a horrible beast and possibly hanged.

The miser starts as he hears an eerie piping from the byre. “Ah,” say one of the laborers, “we canna hear aught, but likely he will be haunting you the noo. But a killer like yirsel’ shadna be fashed [bothered] by that.” 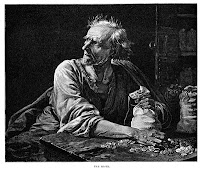 The other laborer says, “Are ye no’”? Whit aboot a’ those you’ve sent oot intae storms, for pure meanness? And hoo dae we ken you dinna feed that coo wi’ some of them? Ye’re a public menace!”

The terrified miser begs them to be silent, and insists on giving them all his hoarded money, along with whatever supplies they want, just to get their promise that he will be left alone. They finally agree, with the stipulation that if other travelers come, he will treat them as he would want to be treated himself. “I dae swear it!” he vows. “By Colmcille, Michael and Bride, I swear it, wi’ oot stinting!”

At last, the men depart, and meet the piper a half-mile away, where they divide up the miser’s “gifts.” The piper has had his justifiable revenge, and goes his way.

A spine-tingler? A blackly humorous tale? Or something more? 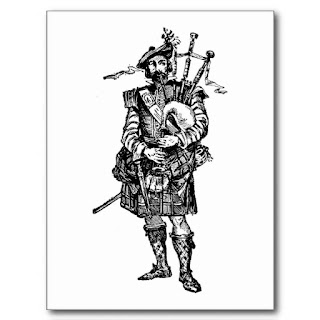