So many people rely now on some form of GPS, whether installed in a car, dictated by an iPhone, or downloaded and printed out from a computer, that roadmaps may become as extinct as cobblers in fairytales! I was thinking about that because I enjoy taking part in Granny Sue's storyteller blog hops —and for this third one, she’s requested a blog “written about you--who you are, where you are, your specialities/focus areas, links to your websites and other information, and why you do what you do. As the hop gains readers, it would be good for them to know about the storytellers themselves and how to find storytellers in their regions.” The idea of a hop is that each participant links their blog to hers, so one can “hop” from one link to another, and I appreciate being included!

When I was 15, my deepest wish was to somehow go around the countryside entertaining folks. How, I had no idea. At the time in the middle of
7 ½ years of being so shy that unless someone asked me a direct question, I was essentially mute, the mere idea seemed so preposterous even to me that I didn’t dare mention it to anyone else! Deep down, what I wanted to be was a modern bard,  defined as one who is a performer, tradition-bearer, historian, teacher, writer, and newsbringer.

Twenty-five years later, my 40th birthday present to myself was the decision to pursue this deferred dream. With my husband John McDowell’s support and help, I bought a Celtic harp from Dusty Strings, joined StorySwap, the Pittsburgh storytelling guild, and a harp circle of my teacher Faith Stenning's students, and evolved a 10-15 year development plan.
﻿﻿
﻿

In college I had realized that far from being as shy as I thought myself, there was actually an extrovert inside dying to get out! I love talking to people, and I love sharing information. Now, planning to be a bard, I knew at the outset that I had a built-in repertoire of Scottish and Welsh folktales, folklore, ballads, poetry, prayers, hymns, incantations and proverbs, the heritage from my maternal grandmother, Abigail Jones Dangler. We had thought that she was the tail end of a long bardic tradtion; it turns out that I am!

My husband, John McDowell, is Scots-Irish, so he requested that I learn a few Irish tales. I did, and realized I was halfway to being a Celtic teller. So I added some Cornish, Manx, and Breton ones too.

Living in Pittsburgh, a city with a proud history of ethnic neighborhoods and societies, I’ve learned many multicultural stories, especially from other local tellers (too many to name; I’d be sure to overlook someone!) who have a rich variety of styles and specialties. There are other sources of tales to tell: because my family loves history, I do some historical tales and legends. As an English major, I know many literary stories, although I tell only a very few of those (another post subject as to why is on my list to do). As a writer, I’ll sometimes craft one of my own creation for telling. Over the last 10 years, I’ve had more requests for family/personal tales. I enjoy tailoring shows for particular gigs, as well as the programs I usually offer.
﻿
And all tales are told in the traditional manner: that is, from my memory, heart, and the gut, NOT read aloud; by now, my repertoire of stories, myths, and legends is well over 5,0000, including variants.
﻿

I learn new ones, not only from reading, but also from other people. I’ve learned so much from members of StorySwap, Storytellers Unlimited, and StoryWorks over the years, and am eternally grateful for Mary Morgan Smith’s vision that brought about the Three Rivers Storytelling Festival, as well as Alan Irvine and Mary's bringing the National Storytelling Network’s 2006 conference here; both allowed me to learn in person from national tellers who generously, memorably, and sometimes hilariously shared their joy along with their talent.

Every storyteller I know has certain genres they love, and I’m no exception. These are tied to my interests: I collect harper tales. I love tales about the faery folk, especially silkies, brownies (pronounced “broonies”), the Tylwth Teg of Wales, and kelpies. If you’ve read any of my earlier posts, you know that I’m fascinated by traditional cloth-making methods, so I know dozens of stories featuring spinsters, weavers, seamstresses, tailors, a few about knitters, and even one about the origin of thimbles! I proudly tell about heroes in Scotland, Wales, and because I was born and grew up in the Muscanetcong Mountains of northwestern NJ, I collect stories of the Lenni-Lenape Native-American tribe whose homeland it once was, as I now also tell stories about Pennsylvania, particularly the Pittsburgh region where I’ve lived since my 20s. A convinced Quaker from the age of 20, I love reading about that history, although, thanks to my background and a request to tell stories at a church in Punxsutawney, PA, for a Scottish Sunday, I probably know more legends about obscure Celtic saints than anyone else in southwestern PA!
﻿﻿﻿
One thing I did early on, as soon as I became computer-literate while working at  Carnegie Mellon University in the early 90s (they wanted us to join interest groups on the Internet) was to join a listserv known as Storytell and another one called the Harplist.  Both are wonderful resources on many aspects of storytelling and harping, respectively, and I’ve made many virtual friends through them over the years. The harp circle I joined in '89 became the Harp Grove of Western Pa in 1997, a chapter of the International Society of Folkharpers & Craftsmen (ISFHC). With Faith and Joyce Emery, I was one of the three founders and its first president. We play out a few times a year, and occasionally I'll tell a tale illustrated by their playing. I also belong to the Scottish Harp Society of America (SHSA), and do a column of Scottish folktales for their journal, Kilt & Harp.﻿﻿

So here I am, almost a quarter-century (or if you add in my earlier dreaming, always the first necessary step in any journey), almost a half-century along, performing as Barra the Bard, a Celtic storyteller and harper, specializing in Scottish and Welsh tales. My initial goal was to combine my harping, singing and telling, and I am doing that more and more, either solo or with my duo partner Linda McNair in ClarSeannachie. Officially I’ve retired from the mundane jobs that helped pay the bills for so many years, but am now available to continue and enpand my telling even more. I’m beginning to work on my first CD, and am immersed in a number of other projects that include writing this blog and (under the pen-name of Barrabard) Tolkien fan fiction on the Henneth Annun Story Archive (HASA) and Tolkien Fan Fiction sites, besides a novel.

My goal in 1989, when I was trying to figure out what I “wanted to do when I grew up” was to find something that excited me so much I could hardly wait to jump out of bed in the morning, something I loved and could do well, that would use and expand my talents. In my ongoing quest to combine my two loves, harping and telling, I am now a harpteller. Along the way, I’ve taught classes and workshops in a variety of places (another post to write!), and done some harp- and storytelling-related writing for several publications here and abroad.

This June will mark my 6th year of telling Asian stories at the Pittsburgh Dragon Festival, a nice change from my usual fare, and in September, I’ll be telling as the official seannachie at the Ligonier Highland Games for the 23rd year. I usually tell there for at least an hour, and I’ve only ever repeated one story one time, by request. Granny taught me a lot of Scottish stories!

I have been telling for almost 25 years, in venues ranging from classrooms to churches, museums to shops, festivals to concerts, holiday programs to charity events, in six states. I’m constantly learning new stories, and I love doing background research on them and related subjects. 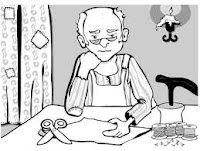 A few days ago on the Harplist, Jon Murphy used the old phrase, “A carpenter should stick to his last.” He thought it was from the Bible, but I wasn’t sure. Wikipedia informed me that no, it was thought to stem from a 4th century artist, Apelles of Kos, whom Pliny the Elder noted was in the habit of displaying his pictures in his window and hiding nearby to hear passersby comment. One day a cobbler grumbled that the shoes were wrong, and the next day was surprised to see that Apelles had corrected them overnight. Pleased to find his opinion vindicated, he criticized the painting of that subject’s thigh. The artist called out in Latin, “Let the shoemaker venture no further,” which over the centuries became transmuted into “The cobbler should stick to his last,” referring to the metal or wooden form on which custom-made shoes were formed before stitching in the long-ago days of pre-factorymade goods. 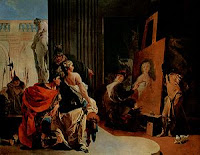 But I further found out that Apelles apparently wrote a lost treatise on painting; Pliny is the source for a few of his aphorisms, including “Not a day passed without a line drawn,” alluding to his diligence in practicing his art every day in his quest to “paint for eternity.”

There—the bones of a possible story to work on, and two proverbial quotations to help motivate me! In stark contrast to “painting for eternity,” harpers and storytellers use air and breath in our attempts to elevate our crafts into art, and what is more ephemeral than those? Yet the materials with which we're working—human emotion and folk wisdom, archtypical truths, cultures,story and music—are eternal.