A Tisket, a Tasket: Basketry

This morning I escorted a visitor outside the building I live in, and it was such a gorgeous April day! I barely needed my sweater! After the crazy winter weather and late spring, everyone seems ready for warmer temperatures. There are two schools nearby, and one was having recess; I could hear that schoolyard hum of their games. Do any elementary kids play “I Sent a Letter” anymore? I can remember Miss Roser teaching us the song when I was in kindergarten at Budd Lake School so long ago:


A tisket, a tasket,
A green-and-yellow basket,
I sent a letter to my love,
And on the way I dropped it,
I dropped it!
﻿

In case you've ever wondered, a tasket is a dialect word for basket and a tisket is the handle. 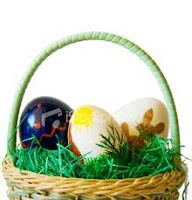 For that matter, do kids even know what baskets are, or like me at that age, do they immediately think only of their Easter baskets? That was all I associated the word with until I was 6, and Mother decided to get a job at Welsh Farms Dairy as a Night Owl. That meant that she’d go to work as soon as supper was over, to answer phone calls from the various route managers and dealers (this was back in the olden days, when dairy products were delivered to people’s homes by milkmen). As each one called, she’d note down on long narrow forms called tickets what they’d need; when all of them had called, she’d transfer how many and what sizes of the different items (milk; eggs; cream; ice cream, orange juice, any novelty items) onto bigger forms called sheets, for the route managers. Before she came home, she’d stop at the loading dock to drop off copies of them; the loaders would know what to put one each truck for the managers to drive to other locations for their dealers to pick up and put in their own trucks early in the morning. She’d drive home over Schooley’s Mountain, getting home around 2 or 3 am, sometimes later depending on how late the calls were and the weather. She always made it home, though, no matter how late or icy or snowy it was. Once she mentioned how a few times she’d had to inch up the outside of the hairpin curve up above Long Valley (going against traffic flow) as the only way she could get traction up that steep turn, hardly able to see, praying that the car wouldn’t slip over the bank and roll down the hill. 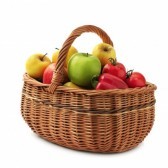 The first night before leaving, she brought out a big wicker basket, a market basket—not that anyone I knew used them! This was before the ubiquitious plastic bags we see everywhere now; during my childhood, most folks where we lived carried things in paper bags or cardboard boxes. “What’s that?” I asked.

“It’s my basket,” said Mother. “Part of my wages will be in dairy products—including the flavor of the month in ice cream!”

This didn’t appease my brother, who was sulking because a) this was a Big Change, and b) none of his friends’ mothers worked outside the home except for one who was widowed. In his opinion, all mothers who had husbands belonged at home, not going off to jobs!

Unlike him, I loved ice cream, so I was delighted, especially since Granny, who of course knew all about it, said, “It’s yir mother’s creel.” 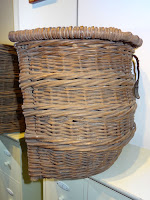 I knew about creels from the Scottish tales she told me; in fact, she’d recently told me the animal fable I retell as “The Twa Foxes & the Creel of Herring,” about that clever Scottish trickster, Gilmartin Fox. The kind of wicker creels used by sports fishermen may have descended from these, but originally, they were often carried on one’s back, and used to transport many different things, not just fish.

When I get interested in a new subject, I want to know all about it; that week it was baskets. Mother pointed out that she used a big oval one to take laundry to and from the clothesline (later replaced by a wheeled cloth bag hung from a folding metal frame when we moved to a second-floor apartment and she was hanging clothes from the landing window, then rendered obsolete later in the Washington Street half-house when the remodeled kitchen included a dryer next to the new washer). Years later, as a teen, my wooden toy-box was replaced by a wicker hamper that I would take with me for extra storage/flat space to set things on in college dorm rooms—I still have it, battered but serviceable, at the foot of the bed. 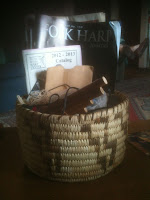 It was why, when we went on a vacation camping trip to the West Coast the summer I turned 11, detouring back through Arizona, that in the Grand Canyon's North Rim gift shop, I chose to buy a round Navajo coiled basket, with a black lightning design against a paler background. At first I used it as a sewing- and knitting-basket—until we began acquiring cats! Luckily, none of the recent ones have shown any interest in the miscellany I keep in it on the coffee-table, including the most recent issue of the Folk Harp Journal and a few catalogs.

Baskets, by the way, come in three kinds: woven, coiled, and plaited (braided). I learned this at Scout camp one summer when I earned a Basketry badge by making examples of each, none surviving the years since. It occurs to me each fall that you hardly ever see bushel baskets anymore; Daddy used to buy at least one each of Mackintosh, Red and Golden Delicious from the apple man up on Schooley’s Mountain, and we’d spread them out in big pasteboard cleaner’s boxes up in the attic for the winter. Every so often Mother would send me up to bring some down, or if I was hungry, I’d go take one of the red “sheep’s nose” ones. Apples are healthy, so no one minded.

These days I corral dry erase markers and pens in a very small woven one on a kitchen shelf; a larger white version holds lotions and medicines in the bathroom; bread baskets are stored in the dining-room sideboard; a wire one is filled with finger puppets I the study, and a lidded, woven, gingham-lined one sits on a windowsill, waiting, with the stuffed Ailpin bird perched inside it ,for my next Scottish persona gig.

Baskets have been made from so many different materials—straw, wooden slats, wicker twigs, pine-needles, even antlers! The pine-needle ones intrigue me; I saw some amazingly beautiful ones on sites such as Peg’s Basketry.
﻿
I found baskets in several nations’ folktales, from the Scottish fable I mentioned earlier, to the Italian “King in the Basket,” to the Welsh “Lludd & the Giant’s Basket” to the Chinese “The King in a Basket”—and I’m leaving out many!

Probably the oldest basket story I tell is the Welsh legend, one of the independent tales in the Maboginion. Lludd and his brother Lleuelys are kings of Britain and France, respectively, when three plagues oppress Lludd’s people: an enemy knowing all their plans and thwarting them; a horrible scream every night that is sapping men’s strength, making pregnant women miscarry, terrifying children, and making livestock barren; and all the harvests’ yields, other than what is eaten and drunk in initial feasts, is disappearing.

Because Lleuelys is so wise, Lludd travels across the sea to take counsel with him. He writes down the basic problem—and I explain to my listeners that at that time, writing was done by carving letters called ogham, or runes, into hazel rods, much more time consuming than using paper and pen. Lleulys has a brass horn made for one brother   to speak into at one end while the other listens at the other—but they find that what is being heard is garbled or the opposite of what was actually said. A demon has possessed the horn, and is drowned in the wine poured through it. Lleulys gives his advice undetected, Lludd follows it, and the enemy is destroyed. 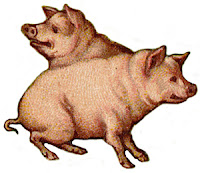 Problem # 2 is caused by two dragons fighting; one screams when he is in pain from the other’s attack. Lludd is advised to measure  the length and breadth of his kingdom until he finds the exact center,  which is in Oxford. He digs up that spot; there are the dragons. He carries out the rest of his brother’s instructions and when the dragons eventually transform into two drunken pigs, has them sealed into a stone chest and then buried at Dinas Emrys.
﻿﻿ 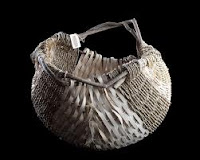 The third oppression is solved by Lludd’s preparing a magnificent feast—and a big vat of cold water. He stands guard during the feast, and late at night, as the guests sleep, as wonderful, soothing music weighs on his eyes, keeps himself awake by jumping into the cold water when he is close to succumbing. Finally, he sees a giant coming in with a basket on his arm—and all the rest of the piles of provender goes into that one basket, which fascinates Lludd. He challenges the giant, they fight so fiercely their weapons strike sparks from the air, and Lludd prevails. The giant pleads for his life, pledging to return all he can of what he stole, and becoming Lludd’s sworn man. So Lludd acquires not only a strong warrior, but a magical basket that can hold more on the inside than it looks as if it couldon the outside.
Because I love proverbs, I looked up some, and besides the one from Carl Sandburg "Put all your eggs in one basket--and watch that basket!"), I liked these:

and this one from Viet Nam: "Go out for a day, get a full basket of knowledge."

May your enjoyment of spring, and your basket of food, knowledge and memories, increase! 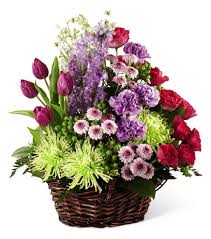