All over the country, people are thanking their moms for being their mothers. It’s a day when I really, really miss my own mother, Dorothy Dangler Jacob, and my two mothers-in-law, Betty Delaney and Myrtle "Matt" McDowell. In Tolkien fanfiction writings, in-laws are referred to as “in-loves”, as in “mother-in-love.” I love that, because motherhood is the personification of love, and I know that the mothers of my two husbands were strong, loving women who did their best to raise their children, and extended to me a welcoming affection, respect and kindness—and trust.

This morning in the Sunday newspaper, in an article of essays about being a mother, I found a German term: Verwaiste Eltern.

It means “orphan parent,” and it means me.

During my first marriage, I became pregnant three times—and each time, I miscarried early, before we announced it to anyone, before I really showed. And it hurt, more than anything else has ever happened to me, more than other deaths, more than health problems, more than pain after car wrecks and other accidents.

It hurt so much I could not even talk about it with my own mother for three years—and when I did, she didn’t want to hear it, I discovered, because she had herself had three miscarriages between my older brother and me, and suffered terrible anger, guilt, shame, grief and depression afterwards. Her reaction to my stumbling words about her unborn grandchildren was, “It isn’t as if they were real, if they weren’t born. Don’t wallow!” and walked out of the room. I felt as if I’d been slapped. We never spoke of it again.

But her reaction was more defensive, I think, than anything else. Years later at a women’s conference, I met a professional grief counselor for the parents of miscarried,and stillborn children, and those infants who do not survive. She listened to my bewildered anecdote, because above all, my mother was NOT a cruel or cold woman, and then she said softly, “Oh, my heart goes out to her! That tells me that she's never really grieved, she’s never let go of all those heavy emotions! The only way she can endure them is to shut them away behind a wall of denial, and she’s been dragging them around ever since she lost those babies, all these years!”

I left, and in the car, parked on a quiet street, I sat and wept for Mother, and for myself, and for all other women throughout time and the world who did not and do not and may not have the support of their families and communities, to help us/them with these deep wrenching hurts. So much of being a woman is defined by mothering. It is one thing to choose not to be a parent, for whatever reason. It is different and difficult to lose a child or children one longs to have. I understand my mother’s feelings of defensiveness and failure; I've had family members snatch their infants out of my arms after less than a minute on the grounds that having never officially given birth, I cannot know how to care for that child for even that short space of time. Never mind that I spent many hours babysitting my sister’s children, one almost from birth, as well as others, for years. Never mind that I successfully finished a course on caring for small children—something that is not required in a country that has more rules about legally driving a car than parenting.

But the hardest, besides all the times, particularly when I was in my childbearing years, were the nights I woke from dreams of searching for my lost three children.

My first husband and I were very active in a church that we attended during and after this period. Every November 1st, All Souls Day, there would be a special service. Its highlight was the reading aloud of the name of each person who had died during the year since the last such service, as family members were given carnations (red for a male, white for a female), to solemnly bring up to two huge vases on the altar, as everyone mourned and celebrated those lives.

There were no carnations for my sons and my daughter, nor for my unborn sisters and brother.

I’m a story lover who has always been immersed in tales. Like everyone else, I make sense of life events by making stories. This is one I have not told before. How long it took me before I began to not just mourn, but to celebrate them, I cannot tell you. They live in my heart. I know their names, the shape of their hands and feet, the sounds of their laughter and tears. I would know them immediately if I met them tomorrow, and I rest in the certainty that someday I will, that Mother has already been reunited with her lost babies, and at last has been relieved of her long burden.

As a storyteller, telling traditional tales, I wonder about the old women helpers at the crossroads, the wise ones who offer testing and help to the questers in search of a good future, whether of rescuing the princess and gaining half a kingdom, or finding their fortunes along a future path. Did they begin as questers themselves, who suffered some loss from which to glean wisdom? Who gave them aid?

I think today of all those my mother mothered: my brother, my sister, and me, and the many girls in her Brownie and Scout troops, and probably others during her long life whom I've never met. I hope that the tales, myths and legends I tell, and the songs I sing and play on my harp, are of use to those who hear them. 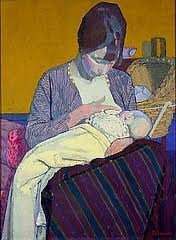 I ask that you consider these proverbs about mothers that I found, and if you hear of someone having suffered a miscarriage or stillbirth, that you will offer them some support, and say a prayer for them and their babies. My brother Rip Pelletier and my husband John McDowell never forget to recognize my invisible motherhood on this day; I can't express how grateful I am! Here are the proverbs:

• Who takes the child by the hand takes the mother by the heart. – German and Danish

• God could not be everywhere and therefore he made mothers. - Jewish

• The greater love is a mother's; then come dog's; then a sweetheart's. - Polish

• An ounce of mother is worth a pound of clergy. - Spanish

• What the child says, he has heard at home. - African

• A rich child often sits in a poor mother's lap. - Danish
• Children are a bridge to Heaven. OR Heaven is under feet of mothers. - Persian

• In every woman there is a Queen. Speak to the Queen and the Queen will answer. - Norwegian

• A baby is an angel whose wings decrease as his legs increase. - French
• There is only one pretty child in the world, and every mother has it. - Chinese

• Friendship reminds us of fathers, love of mothers. - Malagasy

• The warmest bed is mother’s. - Yiddish

• A mother’s tears are the same in all languages. - Pacific Northwest

• Mothers hold their children's hands for just a little while... And their hearts forever.  - Irish

I don’t know, and haven’t been able to find out about, the lady who said this, but I am delighted to quote her, and I hope it becomes a modern proverb:

My mother is a woman who speaks with her life as much as her tongue.-- Kesaya E. Noder

May that be true of all mothers, visible and invisible, today and every day….